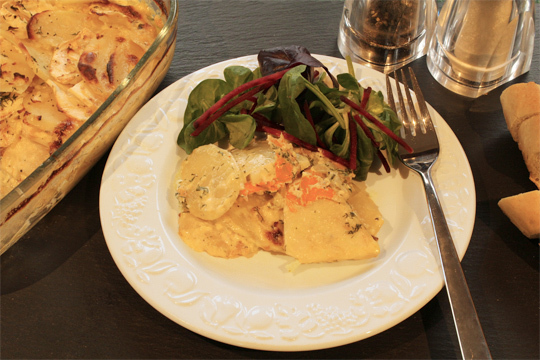 In an oven proof dish lay half of the potato and celeriac on the bottom of the dish.
Sprinkle over half the onions and dill.
Spoon half the cream over the top.
Season with salt and black pepper.
Lay the slices of cold smoked salmon on top of the mixture.
Sprinkle the remaining half of the onions and dill over the salmon.
Layer the rest of the potato and celeriac on the top and season with a little salt and black pepper.
Spoon the remaining cream over the top.
Cover the dish with foil and place on a tray in the middle of the oven.
Cook for 40 - 45 minutes.
Remove foil and continue to cook for a further 40 - 45 minutes until the potato  and celeriac are golden brown and cooked through.
Test by pushing a knife into the vegetables to see if they are soft.
Serve with garlic bread and side salad or wilted spinach and peas.